Last week we spoke to Carol Jantsch, Principal Tuba of the Philadelphia Orchestra.  Carol spoke about her latest recording, released on March 1, just in time to help kick off Women’s History Month.  As we continue to celebrate strong women everywhere, we now turn our attention to another formative presence in the classical music community (who just happens to be on the same recording):  professional flutist Amy Porter.  Music critics have uniquely noted her “strength, beauty, a captivating and seductive force, sensitivity, perfection and a sense of humor.”

Amy recently recorded Trail of Tears; a piece for solo flute and orchestra by GRAMMY-winning composer Michael Daugherty.  Trail of Tears dramatizes the tragic, governmental forced relocation of Native Americans in 1838 and meditates on how the human spirit discovers ways to deal with adversity.  Keep reading to see what Amy had to say about her lifelong passion for music and tackling this difficult subject.

At what point did you know you wanted a career in music?

AP:  Music has always been my life.  I always knew I was born a “musician” and needed to live like one.  Apparently I sang before I spoke.  My parents always told me that I had a special musical gift that I should not lose.  I could practice or do the dishes…but I discovered the trumpet the next year and played both instruments successfully until I was 17.  I’m a brass player in a flute player’s body.

LISTEN TO WOMEN OF CLASSICAL

What is it like giving the world premiere of Trail of Tears knowing that it will likely be viewed as the definitive recording?

AP:  Thrilling. The music has been in my bloodstream for so long that it is no longer notes on a page.  Working an entire week with David Alan Miller and the Albany Symphony in performance was a great energizer for the recording that followed.  These sounds and phrases are in my own unique voice.  It’s a human voice that sings a very human song for anyone who has been displaced from their home.  Michael Daugherty had been wanting to express his feelings within this framework in history.  Taking it on as an interpreter, my performance on this recording is not based on a musical phrase merely written down by a human hand, but continues on as a series of conceptual sounds that are my dedication and portrayal of human suffering and hope for a better life.

Given the historical context and gravity of the subject matter, what did you do to prepare for this piece (besides practice!)?  What does this music mean to you?

AP:  When Michael Daugherty composes, he works carefully with instrumentalists to write idiomatically for each instrument.  We worked together for two years on and off in his studio, listening and playing – understanding the fine line we were walking with bringing a sound and empathy to a tragic part of American history.  I was able to learn it and memorize it as I went along in the process.  Only now do I realize how difficult it is! But these notes and sounds came out of me as the interpretation.  To perfect the score, he held several reading sessions with an orchestra to make sure it was what we wanted.  It was important to both of us to have a beautiful and mournful piece at the same time without sounding like a cliché.  Michael composed an amazing and unforgettable piece that, so far, over the last 7 years, has been met with high approval from the Cherokee and Chickasaw Nations.

I think it’s one of his best works.  I am embracing my vulnerability with this piece and finding the courage as an artist to bring a very raw and emotional availability into the performance on this recording – as if I were playing live.  I am trying to help to reconcile history through music.  Not to merely bring attention to tragedy, but to inspire others to continue to remember, and to equally inspire discussion.

How different is it approaching a new piece of music like Trail of Tears versus a piece by Mozart?

AP:  Style.  Style matters in Mozart as much as any other piece.  Music is music, so play accordingly!  100% commitment to making beautiful sounds and not-so-beautiful sounds is one of the differences that Daugherty’s concerto provides.  That’s because of the elements of extended techniques on the flute that he employs.  When playing Mozart, Mozart = Opera, so we must play accordingly.  No extended techniques needed there!

Who are some important women that have inspired or paved the way for you (musician or otherwise)?

My teachers, Virginia Atherton and Deborah Carter Smith, prepared me in sonority from age 9 to age 16, and Jeanne Baxtresser polished me in form from age 20-22, and then again when I was 26, preparing me for my orchestral career.

Watching the female UMICH Professors interact with their students has taught me a lot. The late Shirley Verrett was amazing in her reverence and dedication to her students, and her school and my UMICH oboist colleague today, Dr. Nancy Ambrose King, is someone who keeps me positive and paves my way every day as a friend and female colleague.  My manager, Marianne Sciolino, reminds me of my good qualities and she likes her artists to stay humble.  That’s always best when your mother’s not around anymore.

We’ve asked you to select a couple of your favorite tracks (besides Trail of Tears!) from our Women of Classical playlist.  Which tracks did you select and why?

AP:  I’ve selected Jennifer Higdon’s String Poetic Mvt 2 Nocturne because Jennifer’s a flute player and her melody writing is superb.  I really enjoy this beautiful recording.  Next, I chose Estancia Op. 8 Scene 5 Malambo by Ginastera with Gisele Ben-Dor conducting, because we worked together years ago at Tanglewood, as well as performed the Ibert Concerto together when we were getting our start, so I think it’s full of her personality and liveliness with the London Symphony.  I think that truly comes across for me on the recording.

Thanks to both Amy Porter and Carol Jantsch for contributing to our March feature on strong women who inspire us!  We look forward to continuing the conversation by talking to an entirely different kind of “strong” next week!  Stay tuned! 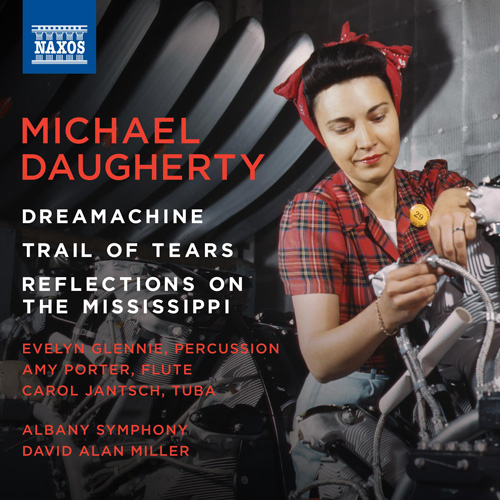